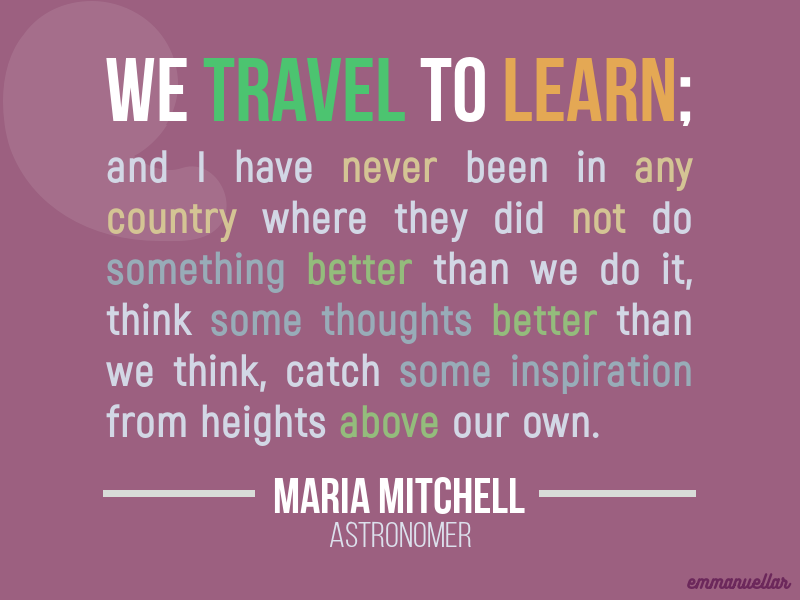 Maria Mitchell is the first known professional female astronomer in the USA and discoverer of "Miss Mitchell's Comet" in 1847. Some sources citated the book Maria Mitchell: Life, Letters, and Journals for this quote.

According to the Maria Mitchell Association website, she had always wanted to visit Europe, and finally did so when in 1857 a banker hired her to chaperone his daughter on a trip to Europe and Latin America. She visited the British Museum, an observatory in Cambridge with several other astronomers, and an observatory founded during the reign of Louis XIV in Paris, France.

I first decided that Wikiquote would be the source for the quote, but it was challenging to filter through the great number of words, and the wiki categories of the many people one have neither knowldge nor idea of barely helped. So Wikiquote was temporarily abandoned, and the task was moved to the websites listed by a Google search - from personal blogs and their "inspirational" articles to quote directories of famous explorers.

I found a quote (in text form) and was quite satisfied with the content. The name was also almost familiar, and I remembered reading Maria Mitchell somewhere. I later decided that it was a Google Doodle I once saw after examining it on the archive. I looked her up on Wikiquote and thought her other quotes a subject of interest as well; the fact that she was a pioneer professional female astronomer in the United States as according to Wikipedia with a role for women in science and education as written by Brain Pickings is simply a bonus.

The quote itself might have a different meaning for Mitchell herself, but I interpreted it as the the encouragement to see the world, the mysteries, wisdom, and knowledge of the universe waiting to be discovered and studied, to be shared and celebrated, and to be enjoyed by the diversity of humanity.

This illustration is created in GIMP with the fonts: Bebas ("we travel to learn", "Maria Mitchell", "astronomer") and Akrobat ("and I have never been ... heights above our own").